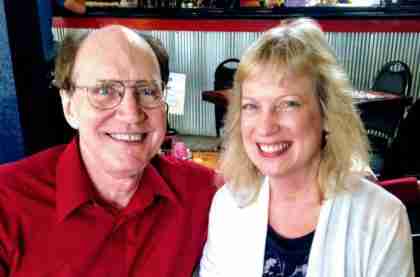 UUFE Member Spotlight is a regular feature introducing a member of our fellowship and their unique story. Below is a piece on one of UUFE’s longest tenured members, Phil Campagnoli. If you have participated in any adult religious education activity at UUFE, you likely know Phil.

Phil Campagnoli’s relationship with UUFE dates all the way back to the 1960s. Phil and his family had just moved to the Elkhart area from Kalamazoo and Phil started what ended up being a long teaching career at Elkhart High School.

It was a “searching period” for Phil and he found a community at UUFE, where his two children, Tony and Kimberly, were dedicated. Phil remembers it being an “exciting time” for UUFE and he dove right in to the religious education offerings available then.

Life took the Campagnoli family away from UUFE for a number of years, but he found his way back, thanks in part to a student he first met in 1977 who already “knew half of what I was teaching” in his psychology and government classes.

Years later, Phil and that student — yes, Geneele — developed a relationship that blossomed into marriage, and they returned to UUFE. Geneele signed the membership book in 2005 and, even though Phil had already signed it, he signed again with his wife.

Phil highly values the religious education offerings at UUFE, in particular the Science and Society group and the Spirit Seekers group. Phil also remembers fondly the summer retreats and being a member of the Endowment Committee. One of his proudest moments was when Geneele served as board president.

When you see Phil, keep in mind that in one of our “thank you” services, he was recognized as “best hugger.”

Thanks, Phil, for being part of our UUFE community.